The hybrid Heston-Hull-White model is tailor-made to analyse the impact of stochastic interest rates on structured equity notes like e.g. auto-callables.

Unfortunately a semi-closed solution for european options exists only if at least two correlations are equal to zero which is in general unrealistic. A set of semi-closed approximations for this model can be found here [1]. The QuantLib has a finite difference pricing engine for american, bermudan and european options for the Heston-Hull-White model. This pricing engine supports cash dividends, control variate via the semi-closed Heston Model and pricing different strikes of european options of the same maturity using one backward solver run (especially useful to gain a large speed-up during model calibration.).

The Heston-Hull-White model is a good testbed to test the efficiency of the finite difference schemes based on operator splitting which are implemented in the QuantLib :

These operator splitting methods are described here [2]. The testbed contains ten parameter sets of the Heston-Model taken from different publications.

The Hull-White parameters are set to

.  The equity interest rate correlation is

The benchmark call options have maturity of 5 years, underlying at time

and possible strikes are

. and with control variate based on the semi–closed Heston Model. Clearly the Douglas scheme is the worst performer, the (modified) Craig-Sneyd and modified Hundsdorfer-Verwer scheme are the winner.

The overall average over the ten models is dominated by the two “pathological” parameter sets  “Ikonen-Toivanen” and “Kahl-Jäckel”. Again the Douglas scheme can not compete with the other schemes. The differences between the other schemes are comparable small except for the largest grid where the modified Hundsdorfer-Verwer scheme performs badly. 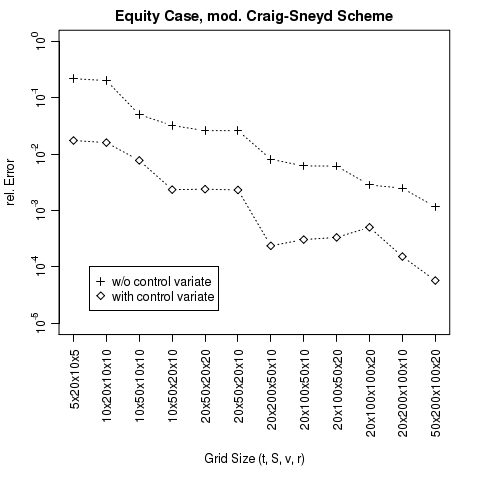 The source code is available here. It depends on QuantLib 1.1 or higher.If you want to generate the plots you’ll also need R.

[1] L. A. Grzelak, C. W. Oosterleea, Lech A., On the Heston Model with Stochastic Interest Rates.

The advantages of payoff scripting based on a build-in interpreter or “on-the-fly compiler” instead of implementing the payoffs in C++ are obvious. Faster time-to-market because there is no need to recompile and deploy the C++ pricing library and people without deep C++ knowledge are able to develop and test new structured products. One disadvantage is often the execution speed of the chosen scripting language. Examples of languages I have seen/used for payoff scripting are Python  (C++ interface boost::python), Lua, tinycc and CINT. When it comes to execution speed none of these are suited to build high performance solutions, see. e.g. [1].  This is especially true if the Monte-Carlo scenario generator is running on a GPU. The payoff scripting on the CPU can then easily become the bottleneck of your pricing library.

Scala is a modern programming language that integrates object-oriented and functional language features. The Scala compiler generates byte code for the Java VM. Therefore the execution speed of a Scala script is comparable with Java and roughly a factor of two slower than C++ [1].

The Scala compiler itself is a Scala object and can be used at runtime to compile and link new scripts or classes. In addition using JNI it is fairly easy to attach a Java VM to a C++ process and to exchange data between C++ and Scala. Also Scala offers a lot of features to design an “internal”, user-friendly domain specific language (DSL) for payoff scripting.

The code for a small QuantLib/Scala Monte-Carlo simulation in action is available here. It depends on QuantLib 1.0 or higher, a Java 1.6 VM and Scala 2.8/9. Overwrite the PayoffImpl.scala class to implement different payoffs without recompiling the C++ code.