The basic equation to calibrate the leverage function

for a local volatility surface

and a set of Heston parameters

Key problem here is to calculate the expectation value

. This can either be done via the Fokker-Planck equation as outlined in [3] and the references in there or via Monte-Carlo simulations as shown in [2].  Getting the solution of the Fokker-Planck equation via finite difference methods is anything but easy if the Feller constraint is violated. In this case the Monte-Carlo approach promises less numerical problems to overcome. Starting point for an efficient Monte-Carlo calibration is a fast and accurate simulation scheme for a stochastic local volatility (SLV) model. The variance part of the SLV can be sampled exactly using the non-central

The boost library supports the inverse of the cumulated non-central

distribution but the calculation itself is rather slow. The Heston QE scheme outlined in [1] comes with an fast and accurate sampling scheme for the square root process. In the case 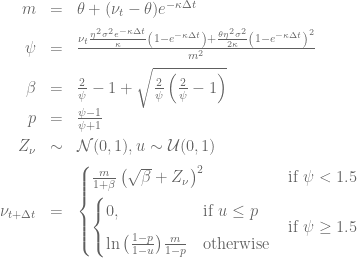 The authors in [2] suggesting a sampling scheme for

. The scheme below is a bit closer to the original QE scheme and without a rigorous proof it has shown slightly smaller discretisation  errors for the examples.

To get from the Monte-Carlo paths to the leverage function the authors in [2] using a binning technique in every time step. QuantLib supports two ways to generate the random draws, either based on i.i.d normal variables or based on Sobol quasi Monte-Carlo simulations with brownian bridges. 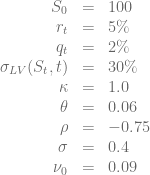 will remove the skew and term structure introduced by the Heston model and shifts volatility to 30%. In order to measure the calibration quality the price mismatches expressed in volatility basis point differences are calculated for OTM calls and puts with prices above 0.02 and for maturity from one month until two year. The SLV prices are calculated by solving the Feynman-Kac backward equation using finite difference methods.

The average pricing error is decreasing with the square root of the number of Monte-Carlo calibration paths if one always choses the optimal bin size as shown in the diagram below.  Quasi Mont-Carlo path generation with brownian bridges gives a small advanage.

As expected the leverage function itself exposes some Monte-Carlo noise, see diagram below. The corresponding leverage function based on the finite difference method is smooth but the overall calibration error is of the same size.

The calibration for different mixing factors

is straight forward. The diagram below e.g. shows the prices of a double no touch option for different distances of the (symemtric) lower and upper barriers expressed in terms of the corresponding Black-Scholes prices. This diagram type is derived from figure 8.8 in [4].

The source code is available on github as part of the test suite HestonSLVModelTest.