One key aspect for the performance of multi-dimensional finite difference methods based on operator splitting is the performance of the underlying tridiagonal system solver [1]. The authors in [2] have analysed different solver strategies and they have reported a speed-up factor of around 15 between GPU and CPU for the best solver strategy (cyclic reduction) on very large systems. CUDA’s sparse matrix library cuSPARSE contains a routine to solve tridiagonal systems based on cyclic reduction. nVIDIA claims a speed-up factor of  around ten compared against Intel’s MKL library [3].

Main classes of the GPU implementation of the Hundsdorfer-Verwer operator splitting scheme are: 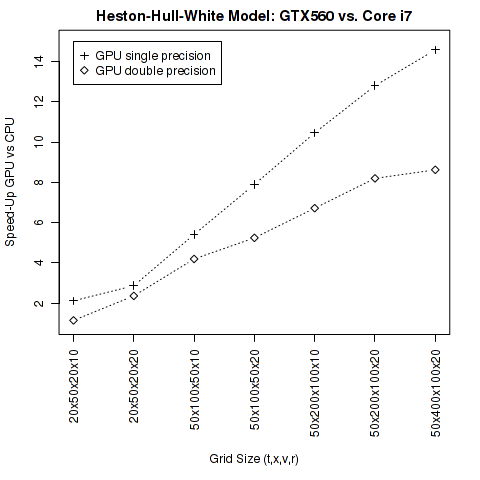 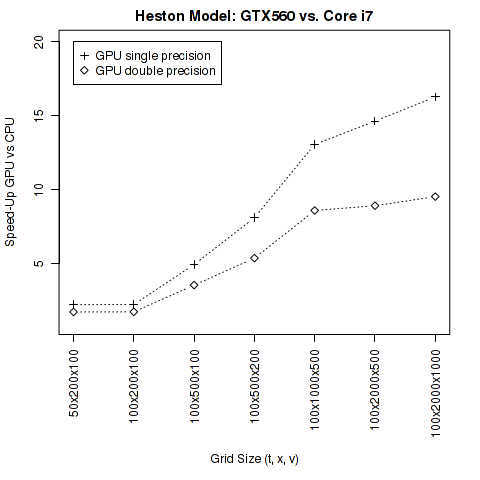 The code is available here and it is based on the latest QuantLib version from the trunk, CUDA 4.1 or higher and Cusp 0.3 or higher.  As can be seen from the diagrams above the speed-up factor depends on the problem size. Speed-up factors above ten can only be achieved for very large two-dimensional or for medium-sized three-dimensional problems. The GPU precision is defined in cudatypes.hpp by the typedef for the type “real”.