As outlined in Solving Sparse Linear Systems using CUSP and CUDA a VPP pricing problem can be solved on a GPU using finite difference methods based on the implicit Euler scheme. The matrix inversion is carried out on the GPU using the BiCGStab solver of the numerical library cusp [1]. The  optimal exercise problem for the VPP can be solved using dynamic programming for every time slice on the GPU (see [2]).

The lower convergence order in

. It converged only for large

Clearly the matrix inversion dominates the overall runtime of the pricing routine. Preconditioning is a standard technique to improve the performance of the involved BiCGStab algorithm. The cusp library supports a set of suited preconditioner for this problem.

On a CPU QuantLib supports preconditioning based on the Thomas algorithm. This algorithm solves a tridiagonal matrix with

The testbed is a VPP contract with

and a maturity of 4 weeks (corresponds to

exercise steps). Therefore in addition to the three dimensions for the stochastic model the problem has a fourth dimension of size

to solve the optimization problem via dynamic programming.

The following diagram shows the different run-times of the algorithms on a GPU and a CPU. 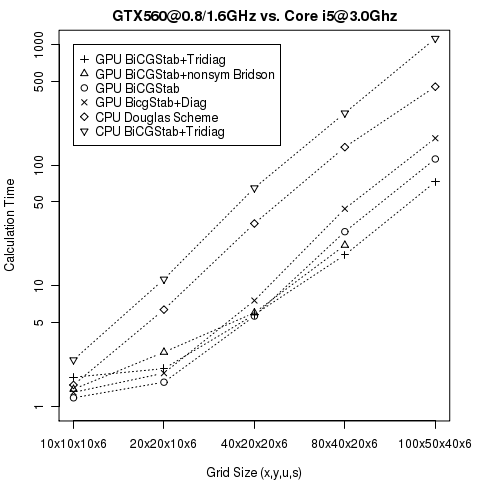 [2] Pricing of a Virtual Power Plant on a GPU

A finite difference equation can be represented and solved based on a sparse linear system. When using schemes with implicit parts to solve the equation one needs to calculate the inverse of this sparse matrix. Iterative solvers like the BiCGStab algorithm (plus preconditioner) are tailor-made for these kind of problems. In addition these solvers can easily be adapted to parallel computing architectures like modern GPUs. The cusp library [1] implements a set of common iterative solvers for sparse matrices based on CUDA and thrust [2].

Alternatively operator splitting techniques can be used to solve the problem. In this case only tridiagonal linear systems have to be inverted. The Thomas algorithm (named after Liewellyn Thomas) can solve such systems in

operations required by the Gaussian elimination. But it is not easy to parallelize the Thomas algorithm.

On a CPU operator splitting usually outperforms iterative solvers like BiCGStab for the implicit part. The VPP pricing problem from the previous blog entries will now serve as a benchmark to compare the solver performance on the CPU against a GPU. As can be seen in the diagram below on a CPU operator splitting is faster than the BiCGStab solver plus preconditioner. But the BiCGStab on the GPU clearly gains the lead even though the corresponding preconditioner for the GPU has not been implemented yet. Please find the interface class between QuantLib/boost::ublas and cusp here.

[2] thrust, Code at the speed of light